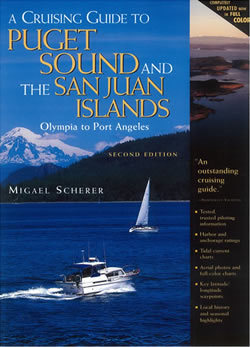 A Cruising Guide to Puget Sound and the San Juan Islands

The first comprehensive boater's guide to the almost 2,000 miles of shoreline and more than 300 islands of Puget Sound. A Cruising Guide to Puget Sound and the San Juan Islands has earned a glowing reputation for the lucidity of its writing, the high quality of its information, and the accuracy of its piloting instructions. The 2nd edition includes color photos and nautical chart segments throughout, as well as approaches and anchorages, weather, tides, currents, and local history and attractions. The definitive resource.
"...everything a yachtsman's pilot ought to be: shipshape, ...unusually well written, very thoroughly researched." -Jonathan Raban

Excerpt from Blake Island State Park entry:
Only seven miles from downtown Seattle, Blake Island stands apart in this densely populated region of Puget Sound. All of its 475 acres are state park. Its only development is centered on Tillicum Village on the northeast point. The carved, decorated longhouse and totem poles seem to have emerged from the woods on their own, testimony to the island’s heritage as campground of the Suquamish Indians. Visitors arrive by tour boat for the salmon dinner, the traditional dances, and an all-too-brief glimpse of the island itself. The luckier ones enjoy longer stays on their own boats, tied to the dock of the snug harbor or to one of the park’s many mooring buoys. . . .
From the north, Blake Island’s low northeast point appears as a clump of trees. From the south, the sandy isthmus to the breakwater jetty, and the madronas off the campground are also visible. Approaches are clean and deep, except along the island’s northern shore, where a considerable shoal extends almost 500 yards off the northwest corner of the island. . . .
A small-craft harbor with floats is tucked in behind the rock breakwater on the northeast point of the island. This breakwater is connected to the island by a low sandy isthmus. Enter northwest of the breakwater, between the three green and three red marks on pilings. Depths are steady, but you can easily go aground if you wander out of this narrow dredged channel. At green “5” make a sharp turn to port (southeast) into the harbor. Currents in the entrance channel can be strong, and generally run opposite to the current in Puget Sound, ebbing when the sound floods, flooding when it ebbs.
There are a number of floats inside the breakwater. . . .

Excerpt from Wasp Islands entry:
Between Shaw and Orcas lies a cluster of smaller islands that take their collective name from narrow, twisting Wasp Passage. All of these islands are steep-sided and surrounded by reefs. All are either National Wildlife Refuges or private. The channels between them are peppered with rocks, most of them unmarked, many submerged. It’s no surprise that the Coast Pilot emphasizes the hazards here. Few boaters linger in this area, but from late April to early May, some stop to pay homage to the extraordinary wildflowers on Yellow Island. . . .
Shore access to Yellow Island is best on the south beach, where there is a 2-fathom “cove” and enough room for a handful of boats to anchor. The cleanest approach is from the south. From the east, thread your way carefully between Crane Island and Shaw, then continue south of Crane Island and north of Cliff. Stay in deep water (10 fathoms or more) as you pass midway between Coon Island and Nob Island. Abeam of the mark on Shirt Tail Reef, head slightly south until abeam of Low Island; then turn into the “cove” of Yellow Island. This should help you avoid the submerged rock and the 1-foot shoal that lie several hundred yards east of Yellow Island. The stone-and-driftwood house that overlooks the beach here was built by the original homesteaders, Lew and Elizabeth Dodd, and is now used by resident caretakers. . . .

A Cruising Guide to Puget Sound and the San Juan Islands
"...so complete that veteran cruisers will discover cruising grounds they didn't know existed or didn't consider navigable..." –Sail Magazine
Back Under Sail: Recovering the Spirit of Adventure
“Scherer weaves memory, experience, human relationships and the joys of sailing into such an intricate tapestry that each reader will discover something new.” –Sailing magazine
Sailing to Simplicity: Life Lessons Learned at Sea
"...a guide into a sailor's soul...Scherer puts into words the thoughts and insights that are deeply felt but rarely expressed." -48° North
Still Loved by the Sun: A Rape Survivor's Journal
"a book that can enlighten anyone trying to understand the process of healing from violence." -New York Times Book Review

"Why I Turned Down Oprah Winfrey"
"Mendenhall"
"Raven Woman"
Reporter Profiles
"Effects of News Coverage: How the Media Can Help"